Mandy, Mara, Mary, and Rhonda are cheerleaders at Smallville High who created a "love molecule" in their chemistry class, with the addition of some kryptonite.

Mandy was responsible for creating the concoction. By combining the love molecule with a sports drink, the girls realized that they could control their boyfriends. They put the mixture into the water coolers during football practice. All the players who drank were brainwashed and became completely devoted to their girlfriends, to the exclusion of even their own well-being. Clark Kent, however, was not completely affected by the drink; it only made him sick.

To cure the devotees, Clark distracted Mandy by feigning affection for her, while Lois Lane stole the formula from her purse, and figured how to break the potion's influence: expose the infected to extreme heat. 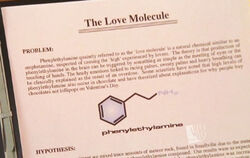 The Love Molecule is a hormone called phenylethylamine. When combined with kryptonite, it acts as a love potion. When ingested, a person becomes completely devoted to the person they are interested in and becomes extremely suspicious of anyone who dares to look at the object of their affection. The Cheerleaders of Devotion used this to make their football player boyfriends completely devoted to them. However, the football players also became insanely jealous, and were even driven to homicidal tendencies. Jason Teague, Chloe Sullivan, and football quarterback Dan Cormay all drank the sports drink and their personalities were changed. The only way to cure them was expose them to extreme heat.

The devotion effect did not work on Clark Kent, a Kryptonian. He was simply weakened and sickened by the kryptonite mixture.

The following is from the notebook of one of the Cheerleaders of Devotion:

It is a natural chemical that is similar to an amphetamine, suspected of causing the 'high' experienced by lovers. The theory is the production of phenylethylamine in the brain can be trigger by something as simple as the meeting of eyes or the touching of hands. The heavy emotions linked to racing pulses, sweaty palms, and heavy breathing can be clinically explained as the result of an overdose. Some scientists have noted that high levels of phenylethylamine also occur in chocolate and have theorized about explanations for why people buy chocolates not lollipops on Valentine's Day.