Member of the Green Lantern Corps

Ch'p is a member of the Green Lantern Corps.

On the Moon, a group of Green Lanterns, including Ch'p, explain to Superman and John Stewart that there is no treaty between the Guardians and the Manhunters and one of them suggests that these Manhunters were rogue units that have gone mad without a purpose. Superman asks who created the yellow rings that powered the robots and the Lanterns explain that in order to battle the Manhunters, the Guardians took extreme measures. After this revelation Ch'p and the other Lanterns decide to return to their sectors and report to their post.

In space, a small group of Green Lanterns, including Ch'p, observe the battle on Earth. The Green Lanterns are not sure if they can fight Parallax because the last time they did it, most the members of the Corps were killed and Oa was almost destroyed. Salaak then plays John's message about the one thing that frightens Parallax, so they decide to find it and stop the fear entity once and for all.

When Parallax is about to attack Superman and the depowered John Stewart, the real help comes when the Green Lanterns arrive on the scene with the entity of willpower. Unfortunately with the yellow power rings getting reset the same happens with the green ones, leaving the Green Lanterns temporarily depowered as well. The two entities begin to battle and with an assist from Superman, they banish Parallax to its realm, which was his greatest fear.

In the aftermath, the Green Lanterns reevaluate their mission parameters and as their rings finish their reboot, they decide to choose their own destiny.

A native of the planet H'lven, he participated in the defense of his homeworld from an invasion by the Crabster army of Doctor Ub'x. He was captured and sentenced to death, but one of the Guardians of the Universe came secretly to induct him into the Corps with the power ring of his predecessor, who had fallen attempting to stop the invasion. Using the ring, Ch'p was able to defeat Doctor Ub'x and free his world. Shortly afterward he travelled to Oa where he was instructed by Kilowog in the same group of recruits as Hal Jordan. Ch'p went on to become the Green Lantern of sector 1014 and became good friends with Jordan, Mogo, Salaak and other members of the Green Lantern Corps. Ch'p maintained a secret identity on H'lven until he married his longtime girlfriend M'nn'e. While not serving the Guardians on Oa, Ch'p defended H'lven from various threats, many of them engineered by his old nemesis Doctor Ub'x.

Ch'p's history as a Green Lantern was fairly typical until his participation in the Crisis on Infinite Earths. Since the crisis had affected the entire universe when he returned to his home, he discovered that history had been rewritten so that he had died in an accident fifteen years earlier. In the new timeline, his wife M'nn'e had remarried his best friend, D'll. Stunned and disheartened, Ch'p abandoned H'lven for Earth, where he served with the team of Green Lanterns that were assigned to safeguard the planet. Unlike the rest of the universe, the members of the Corps were able to recall pre-Crisis events. They were thus the only people who recalled the Green Lantern from H'lven. During this period, Ch'p once again battled Doctor U'bx, the only other person from H'lven who recalled the pre-Crisis timeline. The two adversaries eventually realized the important connection they shared and set aside their differences.

Ch'p's experiences on Earth were primarily negative, such as his shocked realization that his Earthly counterparts were non-sapient animals, so he eventually returned to H'lven to start over. When the power battery on Oa was destroyed following the execution of Sinestro, Ch'p's ring was one of the few that still functioned. The strain of living on a world where nobody remembered him led to depression and a suicide attempt that was halted by his fellow Green Lantern, Salaak, who became Ch'p's advisor and friend on H'lven. The two friends later travelled to Oa to participate in the reconstruction of the Green Lantern Corps. Ch'p was assigned to patrol Oa, specifically the makeshift city called Mosaic World. There he teams up with John Stewart who is under the subtle influence of Sinestro. A yellow tractor-trailer hits and kills Ch'p.

When the Corps was refounded, another native of H'lven, B'dg, was selected as the new Green Lantern of sector 1014, replacing Ch'p. 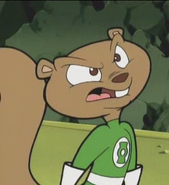 Frank Welker as the voice of Ch'p in Duck Dodgers.

Ch'p in Batman: The Brave and the Bold. 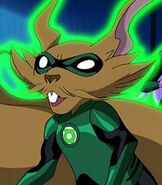 David Lander as the voice of Ch'p in Green Lantern: First Flight. 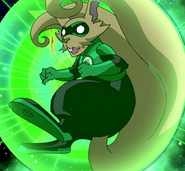 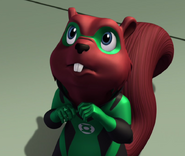 Ch'p in Green Lantern: The Animated Series.
Add a photo to this gallery
Retrieved from "https://smallville.fandom.com/wiki/Ch%27p?oldid=320755"
Community content is available under CC-BY-SA unless otherwise noted.