Smallville Wiki
Register
Don't have an account?
Sign In
Advertisement
in: Recurring characters, Season 9 characters, Characters in the comics,
and 7 more

"Your fate is in my hands, or I guess I should say, it's on my head." - Icicle II, Absolute Justice, Part 2

Cameron Mahkent is a metahuman assassin known as The Icicle II, and was responsible for the death of several former members of the Justice Society of America.

Cameron Mahkent was a metahuman with the ability to manipulate ice.

He appears as a young, albino male of medium height. Unlike his father, he has glossy, white skin, pale red eyes, and light blond, almost white, hair that he wears in a fauxhawk style.

In Absolute Justice, he was wearing a dark blue leather jacket, with a dark blue shirt with a grayish-white back underneath, and a pair of blue jeans.

Cameron, like his father, has the ability to create and manipulate the element of ice to his will.

Cameron inherited his powers from his father Joar Mahkent. His mother died from hypothermia while giving birth to him.

Angered by the Justice Society of America for putting his father, the original Icicle, into a coma, Cameron devoted himself to getting revenge on the retired team of heroes. Luckily for him, the secret organization, Checkmate, was very interested in recruiting his talents and were allowing him to pursue his vengeance at the same time. Icicle II ambushed and murdered the Star Spangled Kid who was attempting to contact Chloe Sullivan, the Watchtower for the new generation of heroes.

Once he had done that, Cameron killed the Sandman next, assassinating him in his own home. He went through a list of the Justice Society, crossing off each one that he killed. His next target was Courtney Whitmore, the protégé of Star Spangled Kid, who had now taken the identity of Stargirl. They engaged in a duel and when Cameron finally got his chance to kill her, he was stopped by the Green Arrow.

He was forced to withdraw from his crusade, needing to recharge his powers with liquid nitrogen. He was intercepted by Doctor Fate, a mystic of the Justice Society's, and impaled him through the chest, murdering him before taking his magic helmet. He went back to his father's room in the hospital with the helmet, gloating about how he finally had the means to destroying the Society once and for all. He pulled the plug on his father, believing that his battle had already been won, before placing the helmet on his head.

He gained almost infinite power with the helmet and tracked the Society and the new team, the Justice League, to their headquarters where he fought them all at once without hesitation. Their combined strength proved too much for him though and he lost the helmet in the battle.

He was arrested but secretly taken into custody by Checkmate, led by Amanda Waller. She explained that she had only used him as a tool to get her way and she pointed a gun at Cameron before welcoming him to the Suicide Squad. She then shot him point blank, presumably killing him.

Later, Chloe told Clark that Cameron was locked up in the psych-ward at Met.Gen, but when she went to check, she was told he was transferred to Belle Reve, although they had never heard of him there.

Unlike his father, Cameron Mahkent has no need for a 'cold gun', as his father's prolonged exposure to the weapon altered his genetics, allowing him to biologically pass down to his son the ability to freeze objects and people or to lower the temperature of a room or other area. This ability unintentionally gave his skin an albino pigment.

Cameron became the second Icicle shortly before joining the Wizard's Injustice Unlimited group. As part of the Superman/Batman "Public Enemies" arc, Icicle II is part of a multi-villain attack on Superman and Batman in Washington D.C.. Despite working with other cold themed villains such as Killer Frost and Captain Cold and having the backing of the villainous President Lex Luthor, Icicle II and all the villains are soundly defeated. During the Infinite Crisis storyline, Cameron popped up as a member of Alexander Luthor, Jr.'s Secret Society of Super Villains.

Other faces of Cameron Mahkent 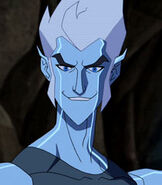 Yuri Lowenthal as the voice of Icicle Jr. in Young Justice.

Chloe: Sylvester Pemberton came to warn me about Checkmate the moment he was attacked by--
Oliver: Icicle. Huh... either that's quaintly coincidental or he's working for the the same lovely lady whose gaze wilts small trees. What do you think?
Chloe: Last I heard he was in a psych ward at MetGen.
Season Nine, Checkmate

Chloe: Dr. Brenner, I was looking for you. You were the evaluating doctor on several patients who came through the psych ward at MetGen who were -- special.
Dr. Brenner: Unless you are directly related I can't discuss patient information.
Chloe: Um, actually none of them made it to Belle Reve after you signed off on their transfer, including Cameron Mahkent?
Dr. Brenner: Once I signed off, those people belong to Belle Reve. Why don't you take it up with them.
Chloe: That's just the thing, Belle Reve wasn't even notified that they were coming.
Season Nine, Checkmate