Cadmus Labs is a scientific research facility that was once owned by LuthorCorp located just outside downtown Metropolis. Cadmus was just being used by Lex as part of a larger plan.

Cadmus Labs was an extremely large facility, vastly containing large test-pillars and machinery is scattered throughout the lab.

Lex decided to secretly re-open this facility and started a cloning project where he stored many self-replicated body-parts along with his own DNA and, in the event of him bearing serious injuries, this project could allow him to heal himself. According to Lionel Luthor (of Earth-2), Lex was able to fabricate and clone his organs, all except a heart.

Lex led Victoria Hardwick to believe that Cadmus was a prosperous lab and that LuthorCorp had sunk all their money into a bid for the company. Victoria then betrayed this information to her father Harry Hardwick in order to outbid LuthorCorp for the company and to "make her bones with Daddy". However, the information that Lex led Victoria to believe was fake as Cadmus Labs was actually worthless. The Hardwicks had sunk all the capital into the bid for a worthless lab. This left them financially vulnerable and allowed LuthorCorp to buy their company outright. This whole process is called "Pumping and Dumping Stock".

In the aftermath of the chaos caused by the Nicodemus flower, Lex Luthor had all of Dr. Hamilton's equipment packed up and sent to Cadmus Labs for further study.

Men with Cadmus Labs-branded caps could be seen working on Miller's Field during the excavation funded by Lex Luthor.

Lex sent Dr. Hamilton to work in Cadmus Labs. When Dr. Hamilton was fired, Cadmus was still his work place. It was also at Cadmus Labs Lex and Dr. Frederick Walden sent the parasite they found in the Kawatche Caves for them to study and dissect it.

After Tess had woken up in the lab, she saw multiple clones of Lex. The clones of Lex did not all turn out alright, some were sick and aged too fast. After one of Lex clones had revealed all of this to Tess, a very dangerous and hostile Lex clone captured Tess and killed the other clones (sans one clone) and captured Lois and made her a "Scarecrow" in the same field as Clark once was made a Scarecrow.

Months Later, Lionel was searching in the destroyed labs for "Alexander"/Conner but found Tess instead. She brought him to an undamaged room within the labs that held a single canister with (as Tess told Lionel) all that's left of Alexander, for the rapid-aging problem had taken his life, turning him to nothing but dust.

In the comic books Project Cadmus is the name of a genetic engineering project to study cloning. It is responsible for the creations and clones of many DC universe heroes and villains. Cadmus has a rival of sorts in the form of the Evil Factory a monster creating laboratory set up by the villainous Darkseid with ties to Intergang. Originally founded by the original Newsboy Legion it was named the DNA Project and was discovered by Jimmy Olsen and the sons of the Newsboy Legion The Project created most notably the clone of the superhero The Golden Guardian and Dubbilex one of many DNAliens, creatures that are genetically manipulated into a non human being with super powers. After the history altering affects of Crisis on Infinite Earths

The Project is renamed Cadmus. Cadmus is first introduced when they create Conner Kent a clone of Superman and Lex Luthor after Superman's apparent death at the hands of Doomsday. It was believed Cadmus was destroyed when Cadmus went to war with Lex Luthor but instead went underground and a problem solver named Mickey "The Mechanic" Cannon is named the new Cadmus head Mickey makes Cadmus more open to the public but Cadmus is taken over temporarily by the Evil Factory and has a series of setbacks. Soon in the time when Lex Luthor became President of the United States, The Guardian and Cannon express their discomfort of listening to President Luthor and all of Cadmus seemingly vanishes. Years later in the series 52 Cadmus is shown to still be in existence (possibly due to history altering affects from Infinite Crisis) where it is discovered for the second time by Jimmy Olsen. Soon Jimmy finds the facility abandoned except for the dying Dubbilex who tells Jimmy Cadmus created the supervillain Codename:Assassin and that he is part of a conspiracy against Superman and killed the original Newsboy Legion and attacked Dubbilex himself as he dies he tells Jimmy to warn The Guardian who has become one of Metropolis' heroes after Superman's absence of this threat.

Its replacement was the OMAC Project, part of the spy group called Checkmate. This project used nanotech to convert otherwise ordinary (and unknowing) individuals into superhumans called OMACs, controlled by a satellite called Brother Eye. The role to of the OMACs was to control and conquer anyone on Earth Checkmate considered a threat.

Bruce Wayne had helped found this Project, but realized just how out of control the Project had become after he discovered heroes like Blue Beetle (Ted Kord) had been killed by OMACs. Wayne as Batman eventually stopped the Project.

Free of OMAC control, the project has once again become known as Project Cadmus.

In this new DC 52 continuity, Cadmus has only existed for around five years. Founded as a stem cell research center, they grew exponentially to become the worldwide leader in bio-engineering and mapping the human genome. They're officially part of Checkmate.

The rogue sentient satellite Brother Eye begins attacking Cadmus facilities using OMAC to steal technology, as he perceives them to be a threat to his freedom. Checkmate begin investigate the destruction under Maxwell Lord's leadership, attempting to bring OMAC and Brother Eye in under their control. Mokkari is called in to hunt down OMAC with his Cadmus creations, but fails. It is revealed that Mokkari infiltrated Cadmus under Desaad's orders to steal New Genesis technology. He is carrying on secret experiments unbeknownst to his superiors.In Checkmate's final battle against Brother Eye, Checkmat's monsters are called in to help in the fight against OMAC.

Other versions of Cadmus 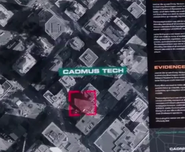