Bryce Gordon is a scientist who was possessed by the Eclipso gem.

At some point in his life, Professor Bryce Gordon went for a dig in Africa, where he found a mysterious black diamond and brought with him back in America.

In Metropolis, Superman tries to contain Professor Gordon, who's been possessed by an evil spirit, which somehow is related with the black diamond he found in Africa a few days ago, that has turned him into a violent monster. Superman tries not hurt him but he has to use force to battle him.

Superman decides to end the fight by smashing the black diamond, shattering it to pieces. After that, the Professor gets back to normal.

At Metropolis P.D., Dan Turpin asks Maggie Sawyer if Bryce Gordon, who is still in custody, has said anything but she says they are waiting for his lawyer and Dan suggests they should call for a priest instead, as the spell should have been lifted from Gordon when Superman smashed the gem. Suddenly, a possessed man enters the police station saying "No spell can leave his wrath from this mortal coil" and then a group of also possessed civilians attack the surprised police officers. Sawyer and Turpin are ready to fight the intruders but they also get attacked by Gordon, who shouts along with the others "We are Eclipso".

Later, Bryce watches from above as Metropolis is set into chaos. He stands atop the Daily Planet and declares that Eclipso is eternal and his wrath will soon set upon the Earth at the setting of the sun.

Superboy and Supergirl take down the possessed Bryce Gordon atop a building. When they offer themselves to Eclipso, so he would leave the bodies of the civilians and then attempt to take him down, he makes Bryce Gordon throw up the diamond. Then all the power is centered in the diamond, which creates a huge Eclipso monster.

Bruce Gordon is a scientist specializing in solar energy. While in the jungle to view a solar eclipse, Bruce was attacked by a tribal sorcerer named Mophir. Before plunging to his death off a cliff, Mophir wounded Bruce with a black diamond. Afterwards, Bruce would be transformed into the villainous Eclipso whenever an eclipse occurred. A blue-gray or purple circle would cover the rightmost two-thirds of his face, resembling a partial eclipse. Bruce would experience many Jekyll-and-Hyde transformations and misadventures in House of Secrets. During this period, Eclipso was portrayed as a conventional villain, possessing super strength, partial invulnerability, and eye blasts (aided by his black diamond). It was later retconned that any type of eclipse could summon Eclipso. This was countered with a simple means of banishing him again: any bright flash of light would turn him back into Bruce Gordon.

In the early 1990s, DC revamped Eclipso in a company-wide crossover built around the miniseries Eclipso: The Darkness Within. Retconned again, Eclipso was not simply Bruce Gordon's dark half, but a vengeance demon who had possessed Gordon. Eclipso's soul had originally been bound inside a giant black diamond called the "Heart of Darkness" in Africa. A treasure hunter found it in the late nineteenth century and brought it to London in 1891, where he had a jeweler cut it into one thousand shards. This weakened the binding spell, allowing Eclipso to possess anyone who became angry while in contact with one of the shards. He was no longer limited to possessing Gordon during an eclipse, but pretended otherwise so that Gordon would not know the truth about the black diamonds. Eclipso claimed he had spent the last several years "posing as a B-level villain" in order to remain undetected by Earth's heroes and had limited himself to targeting Gordon for the purpose of quashing Gordon's research into solar science. If Gordon had achieved his goal of making solar energy the planet's primary energy source, any solar-powered device could be used as a weapon against Eclipso. In the climax of the story, several of Earth's heroes were possessed by Eclipso and being absorbed into his own body, gaining their mass and also their inherent powers. Gordon led a group of heroes armed with solar weapons to the moon in an attempt to defeat Eclipso once and for all and fortunately the absorbed heroes were freed in the end.

In the Eclipso series, after Eclipso had conquered the South American country of Parador by possessing one person at a time, the United States sent an investigation team consisting of Cave Carson, Bruce Gordon, and Bruce's fiancé, Mona Bennet. Bruce and Mona were taken on a tour and shown various atrocities, such as piles of children's corpses. They escaped with the assistance of the Creeper and formed a group of heroes dubbed the Shadow Fighters. Bruce Gordon and Mona Bennet led the Earth's superheroes in an attack on Parador, in an attempt to destroy Eclipso once and for all. Eclipso revealed that he dare not kill Bruce and Mona, because their unborn child will time travel to the past as an adult and free Eclipso from the diamond. Eclipso was finally defeated when the Phantom Stranger and his physical body, the adult child of Mona and Bruce, evaporated in front of his parents.

In Countdown to Mystery, Crispus Allen, the Spectre's current host, tracks down Bruce Gordon, who later once again is taken as a host by Eclipso. Then, Bruce is shown to have some control over Eclipso's powers, but can be overwhelmed by his persona if he uses too much at once. Later, Bruce manages to free the heroes from their corruption, but is overwhelmed by Eclipso when his ex-wife is threatened. Eclipso then joins with the completed heart of darkness, exponentially increasing his powers and faces off against the Spectre but Bruce, spurred on by Crispus, finally manages to take control of Eclipso, although the two cannot be separated.

In Rise of Eclipso, Eclipso reawakens within Bruce, destroying Diablo Island and apparently killing Mona in the process. However, it is ultimately revealed that Donna's death was an illusion conjured by Saint Walker, who used his blue power ring to temporarily trap Eclipso in a state of euphoria and he is later defeated.

After Eclipso's latest host, Jean Loring is defeated, she is last seen sinking into the ocean with a shark approaching and Eclipso returns to inhabit Bruce Gordon, declaring her lost.

In the New 52, Bruce Gordon is renamed as Gordon Jacobs, who until recently was a leader in the fields of natural science and solar energy. After a tragic solar city accident he falls from grace with his career being permanently terminated. He receives the black diamond, which according to him will be his salvation to get his life and career back to where they were. He contracts his colleague Jonah, who is also his fiancee's father, Mona. Jonah tells him that neither he or Mona want to talk to him again as he has embarrassed them both with his actions. Using Gordon's rage, Eclipso from inside the gem manipulated him into cutting himself with the gem so he can posses him. After taking his body Eclipso murders Jonah Bennet, who has come to visit Gordon but after that Gordon realizes that he was out of control and he must destroy the gem but Eclipso tells him that if he does he will also kill himself because they are one and the same now. Eclipso also manipulates and convinces Gordon not to throw away the gem using Mona as an excuse.

Other faces of Bryce Gordon 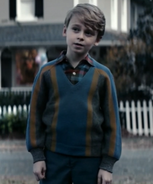 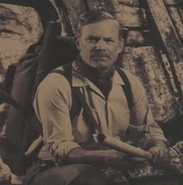