Smallville Wiki
Register
Don't have an account?
Sign In
Advertisement
in: Wikilink templates, Season 8 characters, Characters in the comics,
and 8 more

"Next, we say good-night to the wannabe heroes, starting with Stiletto. That one's personal. " - Bruno, Stiletto

Bruno "Ugly" Mannheim is a mobster and owner of the Ace of Clubs after killing its previous owner, Ron Milano.

Bruno was a thug for the mob and Ace of Clubs owner Ron Milano. He made counterfeit money and mugged Chloe Sullivan along with AJ, stealing Chloe's bag and getting a whack from Lois Lane before leaving in his car.

Bruno returned to the Ace of Clubs and got a drink from new bartender Jimmy Olsen, who asked to get an advance on his pay from Milano. Ricky then came to get Bruno because Milano wanted to see him, but when Milano began to mock Bruno for the mugging, Bruno turned on him, shooting him dead with a silenced gun in the backroom of the Ace of Clubs when Milano said that they were going legit. He then took over Milano's business and announced that they were first going to get rid of the heroes, starting with Stiletto.

When Jimmy came back into work late holding his camera, Bruno took it off him and recognized the photos of Chloe and Lois as Stiletto, and beat Jimmy for information before knocking him out. He was then in the backroom seeing through the counterfeit money when Clark Kent super-sped in. Kryptonite was being used on the counterfeit money, however, and weakened Clark enough that Bruno could punch him to the floor and beat him. Lois, as Stiletto, jumped down and knocked Clark away in time. As Bruno went to shoot her, Clark jumped in front of Lois, blocking her from danger. Jimmy came in and was able to take Bruno down.

Bruno is now the head of Intergang and imprisoned at Stryker's Island. He has in his possession the Crime Bible, which he says was given to him by Gordon Godfrey and supposedly changed his ways. Mannheim then is interrogated by Batman who wants to know the location of Joe Chill's safe house. Later he is interrogated by Superman as well, who takes him in the air and scares him in order to gain information about Chill's involvement with Intergang.

Bruno "Ugly" Mannheim was the leader of the criminal organization known as Intergang. This position left him with vast resources, which he would use to control the underworld. He was also amoral and had no convictions using innocent people for his own means. He got advanced weapons from Darkseid in a deal in which Darkseid got knowledge of the Anti Life Equation. In the comics, after his rebirth, he was shown to have become psychopathic and also a cannibal.

Other faces of Bruno Mannheim

Bruce Weitz as the voice of Bruno Mannheim in Superman: The Animated Series. 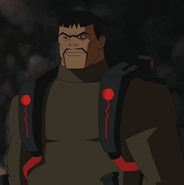 Kevin Michael Richardson as the voice of Bruno Mannheim in Young Justice.