Leader of the Church of Blood

Brother Blood is the leader of a cult that worships a demon, known as Trigon.

Officers Soondead and Gonnabiteit escort the man who attacked Zatanna Zatara to jail. Unfortunately for them, they're intercepted en route by a group of magic-wielding people in hoodies, who cast a spell that makes blood shoot from the officers' eyes, killing them both. Then they free Zatanna's attacker and deliver an ominous message: "Brother Blood would like a word."

Later, Zatanna's attacker is incinerated by a man, who seems to be the leader of the cult. While the acolyte is still smoldering, the leader says Zatanna and Constantine will come for them, as well as when they do, the cult will send Trigon the late cultist's regards.

Following an abduction of a teenage girl, Rachel Roth, by the cult, Zatanna and John Constantine are closing in on the Church of Blood, who is preparing a final sacrifice at Stonehenge to bring the demon Trigon to Earth. They arrive moments before the cult appears ready to kill Rachel Roth. Just as Brother Blood, the leader, raises his ceremonial dagger, John and Zatanna descend from the sky. They succeed to prevent Rachel Roth's sacrifice with Constantine attacking the cult members but suddenly Brother Blood reveals that he was the true sacrifice all along and then stabs himself in the heart.

While demons claw their way out of Brother Blood's body, Constantine grabs the Book of Magic and makes off with it, abandoning Zatanna and Rachel to deal with the demons on their own. With no other options, the two run from the attacking demons.

Zatanna is having a difficult time escaping the oncoming demonic hordes, as they are pursuing Rachel. Constantine eventually has a change of heart and hurries back to Brother Blood's body. He reaches inside the slain man's opened chest to extract one of his organs. Then he recites an exorcism spell that banishes the demons back to the pits of Hell from whence they came.

The first Brother Blood was the high priest of the Baltic country of Zandia who refused to supply recruits for Pope Innocent's Fourth Crusade in 1202. During the ensuing battle, the high priest gained the Cloak of Christ, allegedly worn at the Last Supper, but now corrupted with evil. Wearing the cloak, the priest led his knights to victory. He then bathed in his enemies' blood, which gave him great strength and virtual immortality. The priest declared himself Brother Blood and closed Zandia to all strangers, except those who will join his church and plege all they have to the church. He ruled for 60 years, fathering a son who killed him at age 100. Upon doing so, his son became the second Brother Blood. He, in turn was killed by his son. This continued for seven centuries.

The eighth Brother Blood was, seemingly, the first who wished to extend the Church of Blood beyond Zandia. He wanted the Church to be a world power. The Church of Blood began operating in America and the Titans were called to investigate when an ex-girlfriend of Cyborg attempted to escape this cult. Because of the Church of Blood's influence, the Titans found moving against him difficult, especially when public opinion was turned against them by Bethany Snow, a reporter who was a member of the Church. Brother Blood brainwashed Nightwing and attempted to take control of Raven's power. She defeated him and his mind was seemingly destroyed. Brother Blood's wife, Mother Mayhem, later birthed a girl, suggesting the curse was over.

Some time later, Brother Blood returned to villainy. However, shortly after recreating his cult, he was killed by a young boy, Sebastian, claiming to be the new Brother Blood. This teenaged Brother Blood seemingly based all his decisions on advice from Mother Mayhem, but this was actually a female cultist chosen at random and killed if the advice was not what he wanted to hear. He also exhibited vampiric abilities. He revealed that the Cult of Blood was based on the worship of Trigon the Terrible. It was for this reason that the new Bride of Blood was to be Raven. The Titans were able to save Raven, but the Church of Blood continued.

Brother Blood later appeared as a member of Alexander Luthor, Jr.'s Secret Society of Super Villains, where he claimed an undead Lilith Clay to be his mother. He also summoned the first Hawk and Dove, Phantasm, Kole, as well as Aquagirl from the dead to be his own Teen Titans. Brother Blood was stopped by Kid Eternity and sent to the eighth level of Hell, but not before he summoned the past Brother Bloods, all of which took out their anger and hatred on Sebastian.

In the aftermath of the Reign In Hell miniseries, Blood, now an adult, escaped from his incarceration and was opposed by Kid Eternity. The fight between the two brought them to Titans Tower, where Blood fought the Titans. After draining Red Devil's powers, Blood realised that he had tainted himself with Neron's influence and fled the battle. He was later seen approaching an unknown woman, looking to make her his new Mother.

Some time later, the Secret Six were hired to infiltrate one of Blood's cults and rescue a wealthy teenager who had been forced into the group against his will. After the team's cover was blown, they proceeded to kill a number of the church's members and ultimately destroy their compound.

In the New 52, the Cult of Blood appears once again as Trigon's pawns. Brother Blood kidnaps the Ravagers intending to use Beast Boy's powers in a ritual to travel in The Red's dimension. However the other members manage to interrupt the ritual as Terra buries him alive. He survives and when he returns, it is revealed his obsession with The Red came from being their first option for champion before Buddy Baker was chosen.

Other faces of Brother Blood 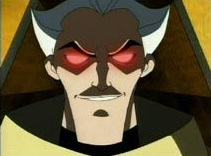 John DiMaggio as the voice of Brother Blood in Teen Titans.

Kevin Alejandro as Sebastian "Blood" Sangre II/Brother Blood in Arrow.
Add a photo to this gallery
Retrieved from "https://smallville.fandom.com/wiki/Brother_Blood?oldid=324019"
Community content is available under CC-BY-SA unless otherwise noted.