Smallville Wiki
Register
Don't have an account?
Sign In
Advertisement
in: LGBT characters, Season 11 characters, Characters in the comics,
and 4 more

The Brain is a French mastermind and criminal genius. He works exclusively with his romantic partner, Monsieur Mallah. He first appears in the third digital/print comic Smallville: Season 11 story arc Haunted.

The Brain explains that he and Mallah rescued each other from experimentation that gave Mallah his superintelligence and separated the Brain from his body.

At the Musée du Louvre in Paris, Monsieur Mallah and the Brain lead a gang of monkeys and apes stealing art to sell to fund and form their own nation. After setting off an explosion, the two step out of the museum to confront Superman and Impulse, who are helping the French police with the chaotic scene.

As Impulse attends to the smaller primates, Superman turns his attention to Mallah and the Brain. Mallah pulls a gun and fires at the crowd. Impulse runs to catch some of the bullets but sees there are too many. He taps into the Speed Force to move faster and is able to stop all of the projectiles.

Meanwhile, Superman uppercuts Mallah off of his feet, knocking him out. He turns to find the other monkeys and apes massing toward him. Winding his arms up and bringing his hands together in a superclap, Clark uses the force and the sound of the clap to upend all of the primates and knock them unconscious.

As a scientist, the man who would one day become known as the Brain performed experiments on animals to raise their intelligence. One of these was on a captured gorilla, raising its I.Q. to the genius-level of 178. He named the gorilla Monsieur Mallah and educated him for almost a decade before making him his personal assistant.

His colleague, Niles Caulder grew jealous of his work and arranged for the scientist to get caught in an explosion, which destroyed the scientist's body. Only the brain survived, which Caulder planned on putting into a robotic body.

Mallah rescued the scientist, taking his brain and transferring it to a computer network that kept it functioning (Caulder would later engineer another accident causing the racecar driver Cliff Steele to crash his car; Caulder then put Steele's brain in the artificial body originally meant for the scientist).

Known simply as the Brain, the scientist and Mallah gathered together the criminal organization known as the Brotherhood of Evil in hopes of conquering the world and getting revenge on Caulder. Now known as the "Chief", Caulder would form, through a series of other accidents that he was later shown to have manipulated, the superhero group known as the Doom Patrol. Caulder's involvement in the events which transformed the Doom Patrol, and the Brain, was retconned decades after the creation of the Doom Patrol and the Brain; originally the incidents were genuine accidents. Setting out to destroy the Chief's "pets," the Brain, Mallah, and their Brotherhood became enemies of the Patrol. Their criminal activities would also pit them against the Teen Titans.

During Grant Morrison's Doom Patrol run, Mallah had the Brain placed in Robotman's new body. Robotman's brain had been removed from it earlier, due to it malfunctioning. In his new body, the Brain confessed to Mallah he was in love with him. When Mallah revealed he felt the same way, the two kissed. However, Robotman's body had developed sentience and vowed never to be enslaved by a brain again; when Mallah placed his lover in the body, he triggered a self-destruct mechanism, which exploded as they kissed.

The two would later resurface (the Brain back to floating in a jar). It is uncertain if the two somehow survived the explosion, or if they were brought back to life by some alteration of reality. In Zero Hour, the world was destroyed and recreated with subtle differences. In Infinite Crisis, Superboy-Prime's pounding on the "walls of reality" created ripples which altered reality and caused history to repeat itself for several characters.

The Brotherhood later began raiding genetic research facilities; their plan being to unlock the secrets of cloning in order to create a new body for the Brain, so he and Monsieur Mallah "can finally live happily ever after." The Brain was ultimately able to clone a new body for himself, but after a short while it began to break down, so he had Mallah rip off his head so he could put his brain back into another jar.

In the New 52, Brain is the revealed to be alive in the new reality post-Flashpoint. He sends some of the Brotherhood of Evil members to steal the Blue Beetle's scarab.

Other faces of The Brain 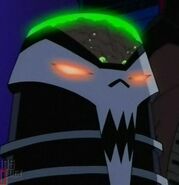 Glenn Shadix as the voice of The Brain in Teen Titans.

Dee Bradley Baker as the voice of The Brain in Batman: The Brave and the Bold.

Nolan North and Corey Burton as the voice of The Brain in Young Justice. 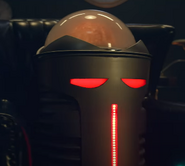 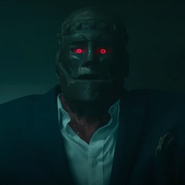