Smallville Wiki
Register
Don't have an account?
Sign In
Advertisement
in: Season 11 characters, Recurring characters, Characters in the comics,
and 5 more

Bones was the director of the secret government organization D.E.O., until his death.

Bones was a sickly looking man. He was quite thin and has dark skin. He was also medium height.

It is revealed that since Bones' skin was turned invisible, he used a special kind of body paint to cover it on a weekly basis.

Bones was rude and conceding. He was proven to be highly impatient as well.

During World War II, Bones was a member, and presumably the leader, of a shadowy anti-occult unit called "Shadowpact", along with Felix Faust and John Zatara, with the latter leaving the unit after their first mission. At some point during the course of their work, Bones and Faust stumbled upon an ancient artifact and made ​​a deal with the god Hades to give them eternal youth in exchange for helping him return to the mortal world. Bones was unable to fulfill his end of the bargain and paid the price, with Hades turning his skin invisible.

At a later time, Bones helped Steve Trevor put his life back together after Trevor was kicked out of his base.

In present-day Washington DC, Senator Martha Kent gets into the car of a man who is nicknamed "Bones" and is the director of a secret organization, called the Department of Extranormal Operations or D.E.O. Bones, impressed by Martha's achievements on the Vigilante Registration Act, asks her to work for D.E.O. when her term as a Senator expires, but she does not seem to be interested in collaborating, having already been aware of the organization's actions when she was still acting as the "Red Queen" against Checkmate.

Suddenly, they are attacked by a team of masked people that appear out of nowhere. Bones succeeds to escape thanks to one of his agents, leaving Martha behind all alone. Fortunately, she is rescued by a mysterious woman who defeats a pair of the attackers and forces the others to march away.

At the headquarters of D.E.O., Bones protests the level of ineptitude of his men against the attack suffered by the Senator. He is also angry because his men recently lost the trails of the White Martian that appeared in Gotham City months ago. Then one of his men reports to Bones that a man is outside their headquarters. He sends Steve Trevor to greet him.

The next morning, the D.E.O. has the place quarantined while they are investigating the insides of the building. General Sam Lane and Mr. Bones discuss the events of what has happened. Sam Lane want assurance that the events shouldn't happen again or else the President will rethink the D.E.O.'s independence. Mr.Bones argues that the D.E.O. are moving in directions the Government can't and won't with General Lane said shades of Waller are poking through his makeup. Bones wonder how Superman wound up in all of this. General Lane replies wherever his daughter goes, trouble and the Man of Steel are sure to follow, but not necessarily in that order. Bones ask what happened to keeping a passive eye on him, with Lane saying that the recon was being generated by an Outside Vendor who has experienced some "technical difficulties". But he hears Superman had it all under control before Team 7 arrived and started shooting up the place while Bones was wondering where the team's leader is. Then Sam Lane says he has a pretty good guess.

In his office, Director Bones gets his weekly makeup application in order to hide his true look, a black skeleton. He then learned that one of his private alarms and a specific fingerprint match was made through IAFSIS.

At Congress hall, Felix is admiring before Director Bones comes in and interrupts. He comments on how Felix looks like he hasn't aged a day, where Felix admits he found away to iron out the kinks and not have his skins and muscles painted visible like Bones does. Felix tells him that he is trying to finish what Shadowpact started and in order to do that he needs Diana arrested, but Bones denies that request claiming that after the VRA, they can't touch the heroes due to strong public support. Felix reveals she is not of this Earth, causing Bones to wonder if she is an alien, before Felix threatens to send something way worse than harpies if Bones doesn't comply with his demands. Bones is not unnerved and says Team 7 can handle anything he dishes out. Felix quickly loses patience and nearly takes down Bones removing his makeup with magic simply stating "Hades taketh away and Faust returneth". Bones begs for mercy and Felix simply tells him to bring Diana into custody before he gets Team 7 to lock Bones away into the Black Room along with the rest of the oddities.

Later the D.E.O., bringing a tank, surrounds Steve Trevor's apartment with Bones being outside calling for Diana's arrest.

Indeed, Diana admires the craftsmanship of the tank before breaking it down effortlessly. Bones orders the soldiers to shoot at her again and when they do hit Diana, she appears yet again unharmed. Diana then proceeds to destroy the tank and as she flips it over, one of the soldiers inside accidentally presses the fire button which causes the tank to explode but fortunately Superman saves them just in time. Steve then comes out of his apartment and tries to reason with Bones but he orders to fire at them again. Diana succeeds to deflect the bullets and save Steve but more soldiers fire at her.

Bones then tells Diana that he can take her to her mother. Diana accepts the offer and to even being handcuffed with magical shackles, saying that if they keep their word she will not struggle. D.E.O. takes Diana into their custody and moves her from the scene.

Bones then proceeds to torture Diana inside D.E.O.'s headquarters. He reveals to her the truth about him and Faust and the real mastermind behind all this, Hades. After his revelation, he continues to torture Diana explaining that he wants to prevent her from hindering Faust's plan and also because he wants to understand the limits of her people.

Bones is informed by Cameron Chase that they are under attack by a hostile force, who aim the monks, who are supposed to protect the facility. Bones realizes that Faust leads the attack and that he actually played him. Diana mocks him by saying that he should had never made any deals with the "devil" and Bones replies, before loading his gun and leaving the room, that they will resume their conversation shortly.

Suddenly, Bones shoots Faust, saying that he will not let him destroy the world, by unleashing Hades. Faust mocks him and tells him that Hades' challenge first cost him his skin, muscles, and now he is going to take away everything else. After which he proceeds to reflect the bullets back at Bones, seemingly killing him.

After Hades's attack on Washington is stopped by the combined efforts of Superman and Diana, Steve takes Bones' place as the new director of D.E.O.

Mister Bones was born with invisible skin, the young mutated child joined Helix, which was a group of other children who, like him, had parents who took part in a science experiment.

Although they were meant to be heroes, they were misguided and came into conflict with Infinity Inc several times. As an adult, he found that he had developed an acid - touch and adopted the name Mister Bones, due to the fact that you could only see his skeleton. After that, he reformed and ended up joining Infinity Inc for a short period until he accidently killed Star-Spangled Kid and was forced to hide.

Once again he returned, but this time as the director of the DEO, working for Amanda Waller. He then went on to use the name Director Bones. He has had numerous interactions with the operations of the superhuman community. He has at times asked various DCU teams for their covert assistance. Notably, he has worked with the Justice Society of America a few times, to the point that Mister Terrific infiltrated the D.E.O. headquarters to tell Mr. Bones to stop harassing them. Bones was also wary of Atom Smasher, his old fellow Infinitor, after his murder of Extant. In a Final Crisis tie-in, Mr. Bones is seen as one of the fallen during a strike against Wonder Woman's Female Furies in Blüdhaven. It was revealed he survived the encounter as he is seen with Atom Smasher in a bar discussing the aforementioned incident and the latter's position on the team. When Rothstein leaves with other Society members, Bones is seen on the telephone calling the Global Peace Agency.

In the New 52 Mr. Bones is shown to be acting again as the D.E.O.'s director and tasks agent Cameron Chase with capturing Batwoman.

Other faces of Bones 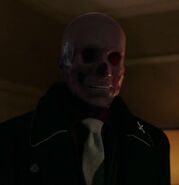 Keith David as the voice of Mister Bones in Stargirl (2021-)