Smallville Wiki
Register
Don't have an account?
Sign In
Advertisement
in: Wikilink templates, Season 10 characters, Characters in the comics,
and 5 more

Black Manta is a member of Toyman's Marionette Ventures team. He was assigned by Toyman to kill Aquaman in 2011.

Black Manta is dressed in black, and wears an oval-shaped helmet with glowing eyes. Two tubes are attached to the helmet which come down to the back of the costume and attach to a back piece. He wears a skin-tight all black leather diving suit, and has a muscular build. He has dark skin.

Black Manta is a member of Toyman's team of super-villains. Toyman had used his cell-phone to command his own team of super-villains directly from Stryker's Island prison. Black Manta was one of the six members that he sent after Clark Kent to have him killed. But when a super powered Lois Lane approached Toyman in his cell and begged him to call off his minions, he did so, but sent her instead, because he was able to control her mind with a mind control diode.

Sometime later, Toyman gave each member of the team an assignment. He sent them each after superheroes for them to kill. He assigned Black Manta to go after Arthur Curry, aka Aquaman.

Wanting to become the ruler of the oceans and enemy of Aquaman, Black Manta would be known as the man who killed Aquaman's baby son and forced the hero to make the toughest choice twice: to give mercy for a killer who will never stop.

He wears a lethal high-tech suit that allows him to survive underwater and adapt to any number of situations with an arsenal of destructive weaponry. Despite his prominence, Manta remains an enigmatic figure, his identity and his origins kept secret. The motivation for his villainy is a deep-seated hatred for the sea due to strong emotional reasons, and a personal vendetta against Aquaman. He has also been a member of O.G.R.E., the Injustice League, and the Secret Society of Super-Villains. Black Manta was created by Bob Haney and Nick Cardy, first appearing in Aquaman #35. (1967)

Other faces of Black Manta 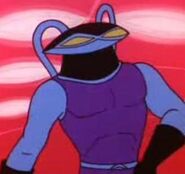 Ted Knight as the voice of Black Manta in The Superman/Aquaman Hour of Adventure. 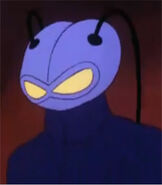 Ted Cassidy as the voice of Black Manta in Super Friends.

Michael Beach as the voice of "Devil Ray" in Justice League Unlimited. 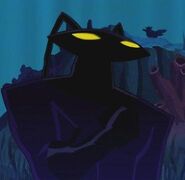 Kevin Michael Richardson as the voice of Black Manta in Batman: The Brave and the Bold. 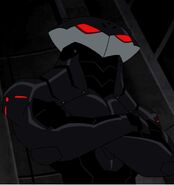 Khary Payton as the voice of Black Manta in Young Justice. 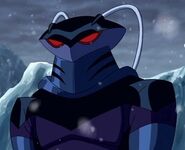 Kevin Michael Richardson as the voice of Black Manta in JLA Adventures: Trapped in Time. 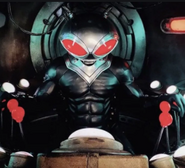 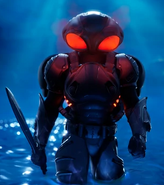