Member of the Suicide Squad
Member of Injustice League (Formerly)

Bette Sans Souci is a metahuman with the ability to project high frequency energy blasts in the form of explosions. She was a member of the Injustice League under the codename Plastique. She is now a member of the Suicide Squad.

Bette is a young African American woman with a slim build, hazel eyes and dark brown hair that contains blue and purple colored streaks in it. When Bette activates her abilities, her eyes glow a fiery orange/purple color.

When first seen in "Plastique", she was wearing punk-like clothes and accessories. When she re-appeared in "Injustice", she looked slightly more mature, with darker hair and wearing her team's signature black leather outfit with the orb symbol on it.

In "Shield", Bette appeared older, now with longer hair (which now only contained blue streaks in it). She wore a similar black, leather outfit only this one did not contain the Orb symbol.

Bette has a fiery personality and doesn't trust anybody. Even when Clark, Davis and Chloe were trying to help her out in her current situation she refused it and ended up being sent to Belle Reve. She is also very protective of herself and her own personal gain, as she killed Tommy after she realized her powers would be revealed. She is also very concerned with what people think of her, as when Tess offered her a job on her team with other people like her she warmed to the idea. When she discovered that Tess had been tracking her and the rest of the Injustice League, as well as killing Livewire and Eva, she wanted revenge

Bette was imprisoned in LuthorCorp's Black Creek facility in Montana when she was only 12 after they found her to have powers. After Tess Mercer took over LuthorCorp, all the prisoners were tagged and released. Bette escaped before being tagged; later, she told her friend Tommy about her past, and he led Tess Mercer straight to her.

"If being better means letting people like her get away with murder, we'd rather be the bad guys" - Bette, Injustice

Bette was released from the LuthorCorp facility in Black Creek and made her way to Metropolis where she was on a bus being followed by LuthorCorp agents and Tess Mercer. She recognized Tess and shot energy blasts at her, causing the bus to explode near the Daily Planet. Clark was able to help the people off the bus, including Bette, and rescue Tess.

Chloe found a staggering Bette in the street and went to help her, shouting over paramedics to help her. Davis Bloome heard and went to check Bette. Bette was transported to the hospital, where Davis revealed to Chloe that Bette was an orphan and had no home. Davis offered a foster home to Bette but she refused and then Chloe offered to take her home until they found a better place.

At Chloe's apartment, Clark came to talk to Bette after learning that the explosion was caused by a meteor freak. Bette told Clark that a street kid named Tommy blew up the bus and then offered to take Clark to him. After finding the boy, Bette shot energy blasts at Tommy and killed him, but Clark and Lois later deduced that Bette was lying due to shrapnel from the drums that had exploded near him having struck his body; the shrapnel should have been blown away from him if Tommy had used his power to trigger the explosion.

Later on, Bette became nervous about being found out and tried to leave but Chloe insisted that she stay, which only angered Bette, accidentally exposing her powers by blowing up a cup. Bette explained that she was merely protecting herself on the bus. Chloe offered to help Bette, feeling sympathy for her, as they both experienced being prisoners at Black Creek. After thinking that Chloe would betray her soon, she attempted to blow up Chloe but Clark arrived and deflected the blast back on herself.

Bette was then being taken to Belle Reeve when Tess intercepted the truck and offered her the chance to save the world with other people like her, on the team of a special unit. Bette was initially skeptical, as she felt she didn't work well with others and was suspicious of Tess, having seen her at Black Creek. After Tess managed to convince her that she was the one that released her from captivity, Bette agreed to join Tess' team.

After intense training, Bette and the other selected group of metahumans from Black Creek were made as a unit for Tess Mercer. Bette then adopted the codename of "Plastique".

Bette and the Injustice gang were set the task of finding Chloe and Davis after they went on the run. When one of the members was killed by Doomsday while trying to stop him, the team started to question Tess' real intentions. Bette proved to have forged a strong bond of trust in Tess and defended her, claiming that the protocol says attack Doomsday as a team and that Tess was the one who saved them from being locked up forever. Bette was unable to convince Livewire, who then mysteriously ended up dead.

Livewire's death made Bette start to question what was happening and her suspicions laid with Tess after Eva Greer also died in mysterious circumstances and Clark revealed the truth that Tess had installed microchips in their heads to keep them under surveillance and kill them if they went out of her control. Feeling severely betrayed, Bette wanted revenge and forged an alliance with her teammate Rudy Jones to destroy Tess. They deactivated the chips in their heads and went to the Luthor Mansion.

Bette blew the door of Tess' room, knocking out Oliver in the process, and then took Tess hostage. They started to torture her so she would release the Black Creek files so they could find the other prisoners and form their own league of meta-humans. Clark then came to the rescue and tried to get through to Plastique but was unsuccessful. She told him she'd rather be with the bad guys and then an arrow hit her in the shoulder and knocked her out.

After saving Tess, Oliver told Clark that Bette and her partner were incarcerated and taken away.

At some point after her incarceration, Bette was recruited by the Suicide Squad.

After Carter Hall traveled to Egypt to keep an eye on Lois Lane as a favor for Clark Kent, Bette infiltrated his camp by posing as a servant and was able to mark him with the Squad's chemical tracker.

She was later present when Rick Flag freed Deadshot from prison revealing him as a member of the Suicide Squad.

Bette Sans Souci was introduced as an even-then anachronistically-depicted Quebec patriot turned terrorist to force Quebec's separation from the rest of Canada. First appearing in Fury of Firestorm #7 (December 1982), she made several appearances during Conway's tenure as writer of that series. She then began appearing in DC Comics' first Captain Atom from 1986 onwards as first an adversary, although that relationship evolved over the course of that series' five-year run towards the romantic.

In her first appearance, Plastique attempted a suicide bombing against the New York Herald-Express (a fictitious newspaper in the DC Universe) using a set of bombs attached to her costume, only to have Firestorm disarm her by vaporizing her clothing, leaving her naked and humiliated in public while Firestorm took the bombs to explode in a safer area. Later, via genetic engineering, she gained the power to project explosive force outward from her body.

She became a member of the Suicide Squad for the duration of a single mission. She attempted to betray the team during their second field operation in Qurac (under the command of Amanda Waller), but was anticipated and caught by fellow operative Nemesis, and subsequently brainwashed to suppress all memories of her membership in the Squad. Her followers eventually abandoned her after becoming disillusioned with the use of force to advance their shared cause (thus reflecting real-world Canadian politics by that point, which had long since moved past the era that Plastique's methods and policies reflected). She then became a mercenary and eventually reformed, subsequently earning a pardon from the United States for her crimes there based on services rendered to the "Captain Atom Project", as well as a somewhat more subdued response along similar lines from the Canadian authorities.

Originally Plastique wore a costume covered with plastic explosives, which she could trigger and detonate manually. She has since gained the ability to project explosive force at will by touching an object with her fingertips. She has been a member of Suicide Squad, Bomb Squad, Extreme Justice with Rick Flag, Bronze Tiger, Multiplex, Captain Boomerang II, Count Vertigo, General Wade Eiling, Marauder, Blackguard, Twister, White Dragon, and Windfall.

In the New 52, Plastique is seen as a member of the Secret Society of Super Villains where she attempts to assassinate Madame Xanadu. She later infiltrates A.R.G.U.S. to plant a bomb on Doctor Light's body.

Other faces of Plastique 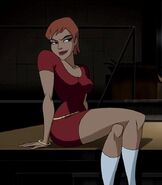 Juliet Landau as the voice of Plastique in Justice League Unlimited. 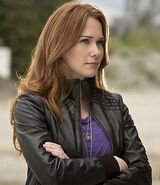 Kelly Frye as Bette Sans Souci in The Flash.