Artemis is an Amazon of Paradise Island.

As most of the Amazons, she has the appearance of an ancient Greek warrior. Her costume includes a black top with silver armor on it and a black and turquoise armored skirt, gloves and sandal boots. Most of her accesoires, along with her bow and arrows have black and turquoise details on them.

As a child Artemis also used to wear silver neck jewellery, which matched with her armor.

Her appearance has not changed much through the years. The only significant change is that her hair has grown longer.

Artemis usually wears her hair up in a ponytail.

Artemis has an aggressive personality but remains loyal and respectful to her superiors. She also seems very antagonistic.

Fifteen years ago at Themyscira, young Princess Diana and Steve Trevor were playing when suddenly Queen Hippolyta, Diana's mother, appears followed by a group of her Amazons. The presence of men is not permitted on the island, as young Artemis says, and she states that they have to kill Steve. Diana starts a fight with her, defending Steve. Then the Queen, after commanding her fellow Amazons to take the boy, cuts the discussion saying that she knows what to do.

Ten years ago, on Themyscira, Diana is forging an aircraft with which she will try to leave the island, when Artemis arrives to confront her about it. Diana says she is tired of waiting for her mother to return home so she decides to go and find her herself. Artemis says that if she leaves too, there will be no heir to succeed her mother as the next queen, but Diana has already made her decision. Artemis reveals that the Oracles of Themyscira had sent her to stop Diana from leaving the island because they had already predicted that she would do so. Artemis fights Diana, questioning her reasons for leaving. Diana manages to defeat Artemis and leaves the island with the aircraft.

Artemis is the Shim'Tar (greatest warrior) of the Egyptian Amazons of Bana-Mighdall.

Artemis was born a member of the Bana Amazon sect that had split off from the Amazons of Themyscira. The Bana Amazons, under the leadership of Antiope, left the island of Themyscira and settled in Egypt, where they founded an Amazon city named Bana-Mighdall. The Bana Amazons renounced the Olympian Deities and instead worshiped the Egyptian Goddesses. The goddesses blessed the Bana Amazons with a perpetual sandstorm around their city to protect them from outsiders. The Bana traded their fighting skills and weapons in return for male slaves to increase their population, and Artemis was the result of one of these liaisons.

Eventually the greatest warrior of Themiscyra, Wonder Woman, journeyed to Bana-Mighdall looking for the villainous Cheetah. Due to a misunderstanding, Wonder Woman was forced to duel the Bana Amazon's greatest warrior, the Shim'Tar, and was defeated. The god Hermes, who was in love with Wonder Woman, destroyed Bana-Mighdall in retaliation, rendering the Bana Amazons homeless. They entered an alliance with the sorceress Circe, who promised to create a new home for them if they served her during the War of the Gods. Because the Bana held Wonder Woman responsible for the loss of their original home, they decided to attack the Amazons of Themyscira. A fiery red-haired girl only fourteen years of age, she stood in front of the Bana's ruling council and protested the action, asserting her belief that Amazons should not fight other Amazons. But since she was only a child, her protests went unheeded and the Bana Amazons went ahead with their assault. During the invasion of Themyscira, Circe betrayed the Bana Amazons and attempted to destroy both Amazon tribes by magically transporting the island to a demonic dimension. The warring Amazons were forced to put aside their differences and fight alongside each other in order to survive the constant onslaught of demon armies. Wonder Woman came to the rescue and forced Circe to return Theymscira back to the real world, but discovered that while only a few months had passed on Earth during this time, an entire decade had passed in the demonic dimension. Artemis was now a beautiful woman in her twenties and had become one of the greatest warriors of her tribe, battle-hardened by ten years of fighting against the demonic hordes.

After Themiscyra was returned to its proper place on Earth, Queen Hippolyta granted the Bana Amazons a small section of the island to serve as their new home. Hippolyta then began to suffer visions of Wonder Woman dying. Since the title of Wonder Woman was held by Hippolyta's daughter Diana, the Queen hoped to prevent her daughter's death by holding a Contest of the Amazons to choose a new Wonder Woman. Initially Hippolyta forbade any member of the Bana from participating in the contest, much to the anger of Artemis and the Bana Amazons. But after Diana pointed out the unfairness of the exclusion, Hippolyta relented and the Bana were allowed to compete.

Artemis demonstrated great battle prowess during the contest and emerged as Diana's strongest challenger. She eventually won the contest with some mystical assistance from Hippolyta, who had privately decided that she would rather see a Bana Amazon become Wonder Woman than risk her daughter's death as foretold in her visions. Artemis was crowned as Wonder Woman and given a uniform identical to Diana's, along with the Gauntlet of Atlas, The Sandals of Hermes and the golden Lasso of Truth in order to replicate Diana's Wonder Woman powers. She then set forth to present herself to the World of Men as the new Wonder Woman.

Artemis' tenure as Wonder Woman got off to a rocky start. Though she could easily match Diana's prowess in combat, Artemis had grown to adulthood fighting mostly demons in a kill-or-be-killed environment and was very rough around the edges when it came to dealing with people. The American public and media generally saw Artemis as being arrogant and abrasive, and she was criticized for resorting to violence far too often. She tried to extend a hand to the superhero community, but usually received the cold shoulder. During her failed attempt to join the Justice League, Batman refused to even allow Artemis to sit in Diana's chair during League meetings.

Desperate to improve her image, Artemis agreed to work with a public relations representative in an effort to make herself a more likable Wonder Woman. Unfortunately, the representative secretly worked for the villainous White Magician, who was determined to bring about Wonder Woman's demise. Though Artemis was starting to turn things around at this point, doing positive things such as helping downtrodden immigrants and abused women, her arrogance again got the better of her and she was lured into a dimension of Hell by the White Magician, who had gained extreme power there. Artemis fought the Magician with all of her might, but his powers were too great in this dimension and she was killed in the battle, proving Hippolyta's visions of Wonder Woman dying to be true. Her body was found and mourned over by none other than Diana herself.

After Artemis died she ended up in Tartarus, and one of Thirteen ruling Princes of Hell, Dalkriig-Hath, became enamored with her beauty and took her as his bride. Artemis did not suffer the unholy matrimony gladly and killed Dalkriig-Hath the moment he let his guard down. She then took the opportunity to escape back to the living world.

Artemis eventually decided to return to her own people, the Bana Amazons, who still shared the island of Themyscira with the Themysciran Amazons. But there was great unrest on Themyscira during this time as a rogue Amazon sorceress named Magala had incited another war between the two Amazon tribes. Artemis quickly proved herself the greatest warrior of the Bana Amazons and was crowned Shim'Tar of her tribe.

As the new Bana leader, Artemis hoped to end the conflict and open negotiations with the Themyscirans, but instead wound up in personal combat with Queen Hippolyta, who had assumed the role of Wonder Woman after her daughter Diana's recent death. During their battle, Artemis reminded Hippolyta that the reason she was the new Wonder Woman was because her actions had led to the death of Diana, and also of Artemis herself. Shocked into her senses, Hippolyta renounced her crown, and Artemis and Themyscirian General Phillipus were elected co-leaders of the unified Amazon tribes.

During the OMAC attack on Themyscira during Infinite Crisis, it was decided by Artemis and Phillipus that in order to save the Amazon race, they needed to teleport the entire island and all of the Amazons to a new hidden location. The Amazons resurfaced some time later, once again under the leadership of Hippolyta. Under the pretense that humans had attacked them first, Hippolyta declared war on the human world. Artemis and Phillipus were assigned to oversee the attack, but soon lost faith in Hippolyta since her actions seemed less than honorable. However, they did not do enough to stop the conflict, and as a result the Amazons were cursed by a disguised Granny Goodness. Their memories were erased and they were scattered to different corners of the world under false identities. Artemis appeared near the Great Wall of China in traveling clothes, with no memories of her Amazonian life.

A few months later the Olympian Deities returned to power, and Zeus restored the memories of the Amazons and brought them back to Themyscira. Artemis, however, was not among them. During her period of memory loss she believed herself to be a normal person without superhuman powers, and while in this vulnerable state she had been kidnapped by Mr. Smyth, the ruthless leader of a notorious slavery ring. By the time her memory fully returned, she had been bound with special shackles and kept constantly drugged in order to make her too weak to escape. Mr. Smyth then tried to brainwash the captive Artemis into serving him by using a frightening combination of drugs and interrogation, but she successfully resisted through sheer force of will. Artemis was later freed by the banshee villain Jeannette, and took violent revenge upon her captors.

In the alternate reality of the Odyssey storyarc the trinity goddess, known as The Morrígan, revive Artemis from death, wipping out all her memories and claiming her to be one of the Hysminai. She is then said to be an avatar to the dark goddess Alecto, and is sent by the goddesses to find the remaining Amazons and their princess in order to seek revenge for leaving her body on the battlefield. After several skirmishes, Diana is eventually able to remove the war goddesses' influence on Artemis by using the Lasso of Truth. Once this happens, Artemis resumes her place as one of Diana's Amazon subjects. She ultimately dies against her former goddesses defending Diana.

In Flashpoint, Artemis followed a much darker path. She killed Wonder Woman's mother Hippolyta and then framed Tempest for the murder in an attempt to keep Themyscira from developing ties to the outside world. Along with the other Amazons, Artemis invaded Britain when their request for aid was denied after Paradise Island was sunk beneath the waves. Ultimately Artemis was killed by Penny Black. She cut Artemis in half while she was pursuing Lois Lane in an attempt to stop her from contacting the world outside of Britain.

Other faces of Artemis 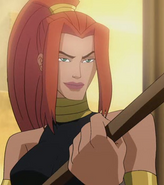 Rosario Dawson as the voice of Artemis in the 2009 Wonder Woman film.

Rachel Quaintance as the voice of Artemis in Superman/Batman: Apocalypse.

Artemis in Justice League: The Flashpoint Paradox.
Add a photo to this gallery
Retrieved from "https://smallville.fandom.com/wiki/Artemis?oldid=305012"
Community content is available under CC-BY-SA unless otherwise noted.