Smallville Wiki
Register
Don't have an account?
Sign In
Advertisement
in: Season 5 characters, Characters in the comics, Characters who can super leap,
and 13 more

"Are you kidding? I'm blind as a bat. Besides the mask doesn't look so good with glasses over it." – Andrea Rojas, Vengeance

Andrea Rojas is a costumed vigilante called the Angel of Vengeance who fights crime in Metropolis. She worked as an intern at the Daily Planet.

When in civilian mode, she wears her hair in a ponytail and wears glasses.

When operating as the "Angel of Vengeance", she wears a long dark leather double tailed trench coat with red insides, black leather pants, high laced boots with spikes on the sides. She also wears a crimson t-shirt, two black leather climbing gloves and a silver spiked bracelet. She wears a black belt, with a metal skull shaped buckle with two swords in an X-shape under it.

She also wears a mask that reaches from her forehead to nose and covers the top of her hair and surround her eyelids in black makeup. Andrea has stated that while in disguise, she swaps her glasses out for contact lenses.

Andrea's mother worked for an organization named Acrata that fought back against gangs, dealers, and large business corporations. On their way home from Andrea's gymnastics meet, she and her mother were targeted and attacked. Andrea's mother was mortally wounded, while Andrea was stabbed in the heart. She was given a heart transplant and survived. However, the donor was a meteor-enhanced metahuman, and as a result, the new organ gave her superhuman strength and agility.

Andrea began fighting crime as a vigilante in Suicide Slums in late 2005. Her desire to get vengeance for her mother's murder fueled her efforts to help others in need.

Andrea saved Martha Kent from a pair of members of the 13th Street Gang. However, one of the gang members was able to make off with Jonathan Kent's watch. Clark sought to find it, feeling guilty he didn’t accept it when Martha offered it to him.

Chloe informed Clark that reports of the mysterious vigilante had been coming in from Suicide Slums for weeks. Andrea, in her civilian life, worked as a mail clerk at the Daily Planet, which allowed her to discover that Chloe was working on a story about her vigilante persona. Trying to give the vigilante a catchy moniker, Chloe dubs her the "Angel of Vengeance." Disguised in her costume, Andrea apprehended Chloe and told her to drop the story, but Clark intervened. Andrea then punched Clark across the bullpen and quickly vanished.

With the help of Chloe, Clark drew her out by pretending to be a mugger. Still mourning the recent death of his father Jonathan Kent, he wanted to find out who attacked his mother so that he could seek revenge. After a brief fight, Clark and Andrea talk and agree they’re on the same side, both suffering from loss.

Clark and Andrea go into the slums to find the location of Snake, they then return to Chloe at the Planet, for her to trace a call for his location.

They find the gangsters and learn that they were the same group that killed Andrea's mother. Andrea forces one of the members to tell her who had her mother killed. After receiving the information that she needed, she killed the gangster against Clark's protests. When Clark tried to stop Andrea, she had him subdued using her Kryptonite locket.

Andrea's final task as the Angel of Vengeance was to kill Lionel Luthor, a man who had called the man, who had ordered her mother's murder. However, Clark was able to stop her convincing Andrea that killing Lionel isn’t what her mother would have wanted. Out of anger she still attempts to drop him out the window, forcing Clark to save him, giving Andrea enough time to escape.

Andrea's extreme act of grief and vengeance helped Clark realize that his father would not have wanted him to become a murderer and he tried to convey this message to Andrea. Shortly afterwards, she left Metropolis, for fear of her secret and regret at killing a man.

After escaping from LuthorCorp Plaza, Andrea returned to her Metropolis apartment hoping to be able to give up her role as The Angel of Vengeance. She was later ambushed at her house by two mercenaries for Lex Luthor, but was saved by Nick Yang, who later warned her that Lex Luthor is hunting down metahumans for Level 33.1.

Nick took Andrea to the abandoned Subway tunnel where he lived with his girlfriend, Molly Griggs, both of who had escaped Level 33.1 and hoped to get back at Lex Luthor by exposing what he was doing. They recruited her to help them break into Luthor Mansion, inorder to recover files which would reveal the truth. As they arrived, Molly revealed their true intentions, which were to have Lex kill himself with a subliminal message from his computer. Andrea stopped Molly from uploading the file and convinced Nick to destroy the computer.

Later, Andrea returned to the Daily Planet to tell her story to Chloe, who promised to keep it off of the record. She revealed her plans to continue fighting crime as the Angel of Vengeance and made a deal, that Chloe would be the one to report on her endeavours.

While attacking Jay Garrick's team, Rose Wilson mentions that she had a fun time taking down Andrea. It is unknown if Andrea was killed. However, Stargirl (another of Rose's victim) was allowed to live. Furthermore, during their fight, Superboy questioned Rose's claim of being a killer.

The version of Andrea Rojas in the comics is different from the one depicted on Smallville. In the comics, she is a Mexican national and the daughter of a professor of history at the University of Mexico. her codename as a vigilante is Acrata and not the Angel of Vengeance.

Acrata specializes in striking against authority. Every time she catches a perpetrator or helps avert a tragedy, she cites a literary quotation or paints graffiti insulting or challenging the local authorities. She often works with fellow Mexican superheroes Iman and El Muerto. Together with Superman, the three saved Mexico and the world from total destruction at the hands of a bio-terrorist group led by a Mexican sorcerer named Duran who was trying to channel the powers inherent in the Earth.

In the comics, rather than the powers she displayed in Smallville, she only had the ability to teleport by becoming a shadow.

Other faces of Andrea Rojas 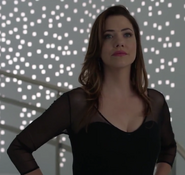