"Fear is what prompts us to protect ourselves. And studying fear gives us insight to others' phobias." – Amanda Waller, to John Jones, Checkmate

Agent Amanda Waller was the ruthless White Queen of Checkmate.

Amanda Waller was a middle-aged African American woman with long black hair and dark brown eyes. She could most often be seen wearing a pearl necklace and wears dark clothing, such as purple silk shirts and black suits.

Amanda is very authoritative as the head of Checkmate and demands a lot out of her agents. She is a rather wealthy individual, who mostly uses her assets and riches to purchase high-tech weapons and gear for her Checkmate program.

She also believes in intimidation saying that, "Studying fear gives us insight to others' phobias". Amanda is often very manipulative and as the head of Checkmate, she uses threats to strike fear into her employees, often threatening their employment or even their families, to maintain her organization. She demands that her agents remain completely obedient saying, "There is only one way out" of her organization.

Being raised in the dark part of Chicago, she is somewhat resistant to cold, as she proved immune to Cameron Mahkent's cold attack. She strongly believed that aliens were on Earth and that they were going to eventually wage war, compelling her to take action accordingly. She was willing to take Watchtower: Chloe Sullivan hostage to lure The Blur aka Clark Kent to her so she could get the locations and names of all of the members of the Justice League.

When Cameron Mahkent used his powers to freeze and intimidate Waller, she acted nonchalant about it by saying she was raised in Chicago.

After gaining control of Checkmate, Waller found Tess Mercer working for billionaire Lex Luthor and recruited Tess into Checkmate. She wanted Tess to keep an eye on his projects, regarding aliens and thus begun her fascination to learn of aliens and if nesscesary, destroy them to protect the world.

"There's an army of heroes growing. This generation and the last are coming together, and I'm gonna need them if we're going to survive the Apokolips that's coming this way." - Absolute Justice, Part 2

Waller hired Cameron Mahkent aka Icicle to hunt down and kill members of the Justice Society of America, using his anger towards them as a catalyst. She later sent clues to Lois Lane about the JSA and Icicle to which she began investigating. After giving Lois time to investigate, Waller visited her, telling her that she planted the classified information and gave her a phone before leaving, all this without introducing herself.

When Icicle failed in his mission, Waller took him into custody and revealed that he had actually succeeded, having been used in order to shake up the JSA and bring them back together. She then aimed a gun at him and said, "Welcome to the Suicide Squad," before shooting him. Waller then met up with Tess Mercer in the Checkmate base, at which point revealing that Tess is a Checkmate agent.

When Tess failed to kidnap Green Arrow and recruit him for the government, Waller threatened to terminate her. Later, at the Checkmate Castle, John Jones attempted to destroy the Kandorian blood sample that Dr. Chisholm took from the Kandorians, but Waller managed to trap the Martian Manhunter. After taking her form to fool a Checkmate agent, John escaped. Later, while she was in her office, Waller had her men kidnap Watchtower. When The Blur came into Waller's office, she showed that she had Chloe and that she knew what she's doing. When she finally made Clark step into the light to reveal his identity, the power went out.

After Clark and Chloe escaped, the Martian Manhunter came back to the Castle and erased her memory of Clark, Chloe and Oliver's identities. She later found a Red Queen chess piece on her chess board and swiped it off in anger, realizing that she wasn't the only player in the game.

Waller had her men search for Tess until she realized where the Kandorians were. When she and her men had captured them, she ordered her men to execute the Kandorians. Clark, as the Blur, arrived just in time to save them all, except for Faora, whom Waller was talking with.

As Waller was threatening Faora, Major Zod arrived and threw her into her car. Fortunately for her, Clark came just in time to stop Zod from murdering Waller. Waller later told Stuart Campbell that he needed to stop his mission against Tess, but he ignored her order. Later, Zod tracked Checkmate down and as Amanda and Stuart were in the hallway, he used his heat vision to burn down the castle, presumably killing both her and Campbell.

Amanda Waller is a major character in the DC Comics universe. She was a widow from Chicago after her son, Joe Jr., as well as her daughter, Damita were murdered and her husband Joe went looking for revenge, only to get killed as well. She remained fiercely protective of her remaining three children. Sometime later she received a doctorate in psychology and political science and then became a congressional aide.

While a congressional aide she found out about the Suicide Squad, which was previously a group of former super-villains working in return for amnesty and suggested to the White House to restart the Suicide Squad. Her proposition was approved and she was placed in charge of the project.

Amanda Waller formed The Agency, a small quasi-independent branch of Task Force X (Task Force X is the official name of the Suicide Squad). Valentina Vostok, recruited, an 18 year NYPD veteran. "The Wall", Amanda Waller's nickname coined by other government agencies, promoted Stein and demoted Vostok. Stein would later reorganize the The Agency into Checkmate. Waller's tenure as head of the third Suicide Squad was controversial and tenuous. She butted heads with her superiors in Washington D.C., the villains who were having their sentences commuted did not like her and the heroes who were her conscious were at odds with her. This prompted Nemesis to leave and Rick Flag Jr, the leader of the Squad would die on a mission. Her conflicts extended to Batman, who was against the formation of the Squad, but would later reform the team.

Amanda Waller was a member of Team 7 and worked alongside Steve Trevor. What covert missions and who else were members have yet to be revealed. Amanda Waller appeared as an essential part in negotiating the rights to the prisoners held in Belle Reve. Those that she chose were put through her initiation process and whoever made it through to the end were assigned to Task Force X, which was informally called the Suicide Squad.

Amanda Waller later formed the Justice League of America that is separate from the main Justice League. Recently she has recruited James Gordon Jr who was revealed to be alive despite his apparent death at the hands of his sister Barbara while saving their mother. However it is shown that James only agreed to join as he is in love with Waller.

Other faces of Amanda Waller 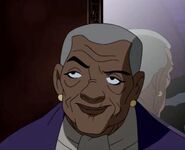 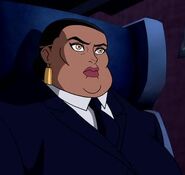 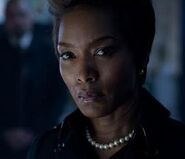 Sheryl Lee Ralph as the voice of Amanda Waller in Young Justice. 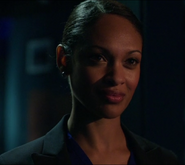 CCH Pounder as the voice of Amanda Waller in Batman: Assault on Arkham. 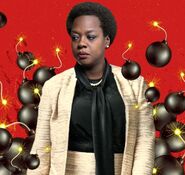 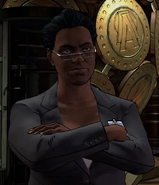 Debra Wilson as the voice of Amanda Waller in Batman: The Enemy Within (2017)

Vanessa Williams as the voice of Amanda Waller in Suicide Squad: Hell to Pay.

Debra Wilson as the voice of Amanda Waller in Suicide Squad: Kill the Justice League (2022)