Aaron Ashmore played Daily Planet photographer Henry James "Jimmy" Olsen. He started his role during Season Six, and became a series regular during Season Seven and Season Eight. Jimmy was killed off in the Season 8 finale, Doomsday, and Aaron left the show as a series regular. Aaron returned to Smallville for the show's final episode Finale, Part 2, in which he played an adult version of his Henry's little brother James Bartholomew Olsen in the year 2018.

Aaron Ashmore and his identical twin brother, Shawn, were born on 7 October 1979 in Richmond, British Columbia, Canada. Shawn Ashmore appeared on Smallville before Aaron—in the Season One episode Leech and the Season Three episode Asylum, as Eric Summers. It would be nearly five years before Aaron would take on the role of the elder brother of Superman's future pal, Jimmy Olsen.

Throughout the years, Shawn has always been ahead of his brother in the acting sense partly due to the fact that when the twins were younger, Aaron got a job to act in a commercial and was too ill to attend so Shawn went in place for him. Since then, Aaron has taken a break from acting, and got to experience life as a regular teenager. It wasn't long though, before he got a job offer to guest star in The Famous Jett Jackson in the year 2000. Since then, Aaron's career has gradually been growing. Aaron is now more sturdily built with a broader face, and broad shoulders.

Now, the twins are living together in an apartment they share in Toronto, Ontario, Canada. 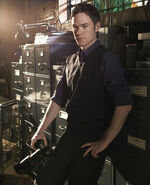